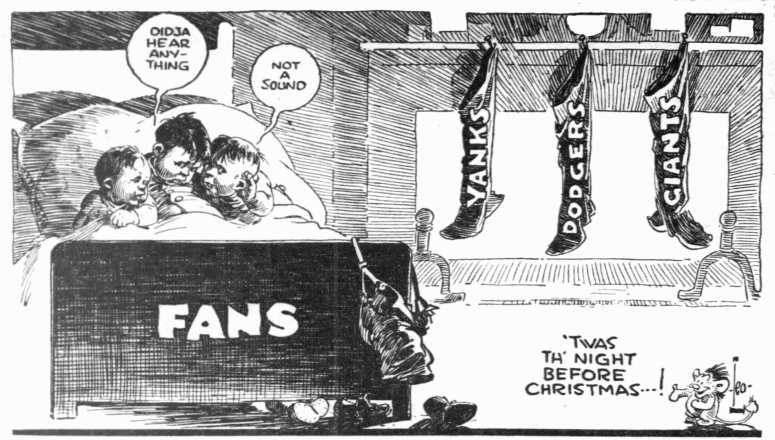 The New York Daily News, Christmas Eve, 1940, and fans of the three teams of Gotham can hardly sleep a wink waiting for Santa to come and hopefully fill their stockings chock full of hits, home runs, some good pitching, and other goodies for the 1941 season. Drawn by the legendary sports cartoonist Leo O’Mealia.

With all three local New York teams missing the playoffs in 1940, all had visions of returning to first place dancing in their heads; for the Yankees and the Dodgers, they must have been very good indeed, as Santa rewarded each of them with league pennants, the Yankees especially, taking the AL flag by 17 games over the Red Sox. And the Yankees carried that momentum into the World Series, facing the Dodgers for the first time (of many) and taking the Championship in 5 games. Alas, though, the Giants had nothing but lumps of coal on Christmas morning, and for many Christmases after that, until 1951, and especially 1954.

Leo O’Mealia rose to prominence with the New York Evening Journal, and later the Daily News. His whimsical illustrations graced the sports pages for decades, and almost always included a small lion (as in “Leo” the lion) adding a parting message or bit of wisdom of his own. O’Mealia died in 1960, to be succeeded by Bill Gallo at the Daily News, a well-known cartoonist in his own right. O’Mealia’s (and Gallo’s) artistry will be seen again in these pages in the future.

And to everyone who has found their way to this small corner of the baseball blogosphere, I hope you enjoy my mini-labors-of-love I post here, and I wish you plenty of good things in your holiday stockings. Merry Christmas and Happy Holidays to all!

3 thoughts on “Art of the Game: Merry Christmas!”