Quite a historic finish to last night’s Game 3 of the 2018 World Series, as the Dodgers’ Max Muncy walked it off in the 18th inning off Nathan Eovaldi to win it. The 16th walk-off HR in World Series history (and the longest wait for it), but who was the very first to send the crowd home on just one swing? 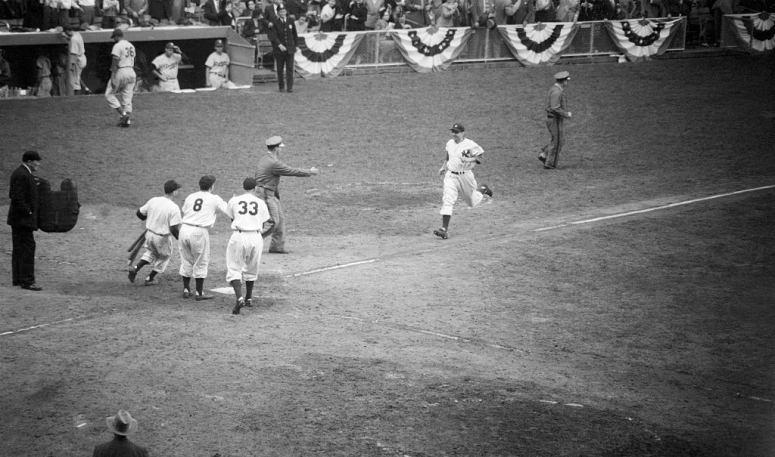 There are typically four famous WS walk-offs that stand above all others to baseball fans at large: Bill Mazeroski in 1960 (winning the WS, natch), Carlton Fisk in 1975 (dramatic, although Boston lost the Series), Kirk Gibson in 1988 (even more dramatic, with a little soap opera thrown in), and Joe Carter in 1993 (also winning the WS). But the very first one, Tommy Henrich’s 9th inning blast off Don Newcombe in Game 1 of the 1949 World Series, always takes a back seat to these. Maybe because it was Game 1? Maybe because it was the Yankees, who won the Series often anyway, and against the Dodgers, who were beginning to make a habit of losing these games to the Yankees? All that aside, it was quite a blow in a very tense contest – no score, with Reynolds and Newcombe going toe-to-toe until one was to fall, and set the stage for the rest of the Series, which the Yankees won rather handily in 5 games. Perhaps it was also an impetus for the next few years, when the Yankees won 5 straight titles with their confidence never higher (and the Dodgers rarely lower, being the victim of 3 of those 5).

For this post, I’ve made a special YouTube video of the entire bottom of the 9th inning (only one batter), called by Red Barber and Mel Allen on the Mutual Network. A 30 second or so film clip of the HR is synched with the audio (which I have never seen together before, so I created the video to do so) at the 2:10 mark.

For “The Clutch” and “Old Reliable” (as Barber and Allen refer to him in the audio above), it was just another day at the office for Tommy Henrich in a World Series – in 1941, he was the fateful batter in the top of the 9th of Game 4 who hustled to first when the Dodgers’ Mickey Owen dropped his third strike, giving the Yanks new life and eventually the title, and was the star of the 1947 Series, hitting .323 with 10 hits and 5 RBI, including a 2-run single to cap a 5-run inning in Game 1, a HR in Game 2, and drove in the eventual game-winning run in Game 7. And he wasn’t done in the 1949 Series, going 3-4 with a run scored in Game 4, and 2 runs scored in the deciding Game 5.

Unfortunately for the 36-year old Henrich, age and injury would catch up to him, and 1950 was his final season, not even participating in the Yanks’ followup World Series victory that October. But his historic WS HR feat will always live on, and maybe with 2018 jogging some memories, may someday be mentioned in the same breath with the HRs of Mazeroski, Fisk, Gibson and Carter.