Ever wonder what it would be like to sit in the front row in one of the classic ballparks? Maybe right up against the bullpen, watching the greats warm up and pop that catcher’s mitt? Well, behold the wonder of the internet age, because not one, but two different folks have posted public Picasa (now Google+)  photo albums not only from this final summer at old Crosley Field (they would move into Riverfront in June 1970), but on the exact same day, and we get front row seats, on both sides of the park!

Sunday, August 31, 1969, against the Cardinals, Bob Gibson against Jim Merritt. Reds were 1/2 game back of the Giants in the newly christened NL West, so it was a big day for the locals at the old park.

First up, Pat Winiger‘s album, from outside and various vantage points inside. As always, click on the photos for glorious larger sizes.

Jim Merritt warming for the Reds

Looks like a Curt Flood double to left, but either in the 5th or 8th inning.

And now Greg Frazier takes over with his camera, on the right field side – here we see the mighty Bob Gibson warming up in the pen, going for his 17th win of the season, just a few feet away, as Cards’ pitching coach Billy Muffett looks on (as always, click the pics for bigger versions).

Note that this second Gibson pic was taken only 2 minutes before the Merritt warmup pic above. Crazy thing, this internet! 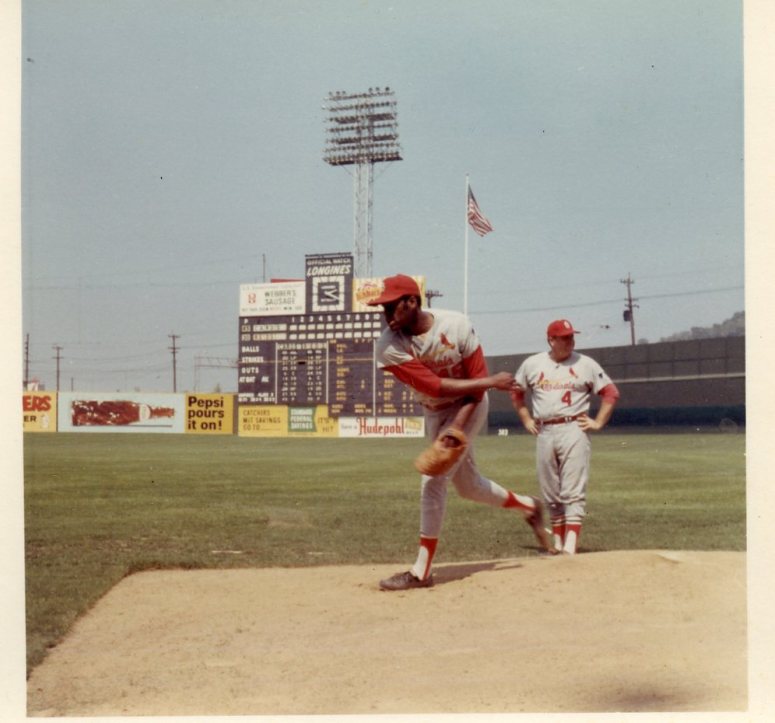 A little later, the game starts and we’ve got a good view of the diamond from our seats! (Cardinals at bat) 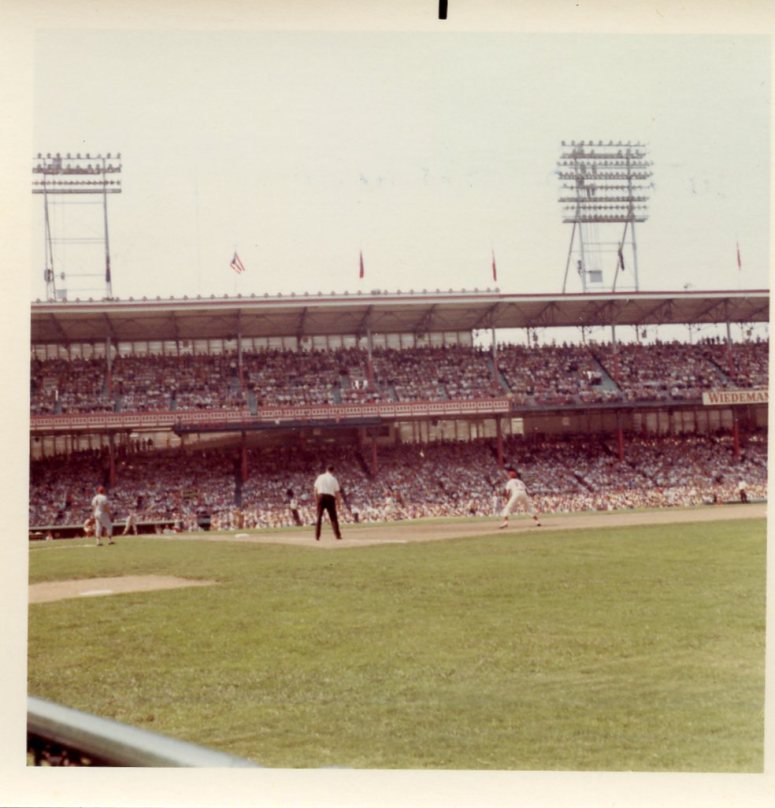 Fortunately for the home team, in an otherwise stellar 20-win season, Gibson actually got bombed this day, giving up 7 earned in his worst outing of the entire campaign, with both Johnny Bench and Tony Perez going yard off Gibby, although he did last 7 innings. Interestingly, this would be Bob Gibson’s last appearance at Crosley Field.

Mudcat Grant warming up in the 7th, seen below, with the Cards down 7-5. He eventually came in to mop up in the 8th.

Joe Hoerner warmed up in the 8th, but did not come in.

Unlike the World Series seasons of 1967 and 1968, the Cardinals were well back in the pack in the new NL East, looking up at the upstart Cubs and Mets by this point. As for the Reds, they did win the game by a 7-5 count as their last Crosley summer was winding down, and it was a big game for them, moving into a tie for first with the S.F. Giants, in the first year of multi-divisional play – the eventual NL West pennant-winning Braves were 2 back at this point, with a month to go. 1970 and the Riverfront Stadium era would bring the Big Red Machine and a very good decade of baseball in Cincinnati. But I’m sure with their new quadruple-decked enclosed cookie-cutter, they never saw so much blue sky at home again.

6 thoughts on “The Last Summer at Crosley Field”