In the late afternoon of Thursday, September 27, 1951, at old Braves Field in Boston, before only 2,086 hearty souls, occurred a controversial call on a play at home during the Dodgers/Braves contest that profoundly altered the NL pennant race with only mere days to go in the season, with every game of the utmost importance, and ultimately resulted in one of the most storied moments in baseball history.

As most baseball aficionados are aware, the 1951 National League campaign is famous for the New York Giants’ improbable rise from 13 1/2 games behind on August 11 to then win 16 in a row and go 37-7 the rest of the way overall (an .841 clip) to tie the Brooklyn Dodgers at the end of the regular season, forcing a 3-game playoff. It has since been revealed that much of the Giants’ success was due to the fact that they were likely stealing signs from mid-season on, through an elaborate system from clubhouse to bullpen to batter in the old Polo Grounds (which doesn’t explain their 17-4 road record during that stretch), but that’s a story for another blog post or two.

The Dodgers entered the contest with only a one game lead over the Giants, and a win would bump it to 1.5 games going into the final weekend – so from there the Dodgers would have to lose “out” to be denied a chance at the pennant. But the hometown Braves had other ideas, and were tied 3-3 going into the bottom of the 8th inning.

Preacher Roe, a winner of 10 straight going into the game, began to tire, and the first two Braves reached with singles. With men on first and third and none out and the Brooklyn infield in, “Specs” Torgeson grounded one sharply to Jackie Robinson at 2nd, who fired a strike to Campanella to cut off the go-ahead run. Then, according to the Times account:

“As Dascoli spread his arms in the safe sign, Campy jumped up and down in violent protest and slammed his glove on the ground. Dascoli instantly thumbed the catcher out, then the dispute grew quickly.”

“Manager Chuck Dressen, his aides, Roe and many other players swarmed around Dascoli in protest, and Coach Cookie Lavagetto also got the heave-ho.”

Thankfully, LIFE photographer George Silk happened to be at Braves Field that day doing a piece on the Dodgers, and captured the rhubarb (click on photos for larger images): 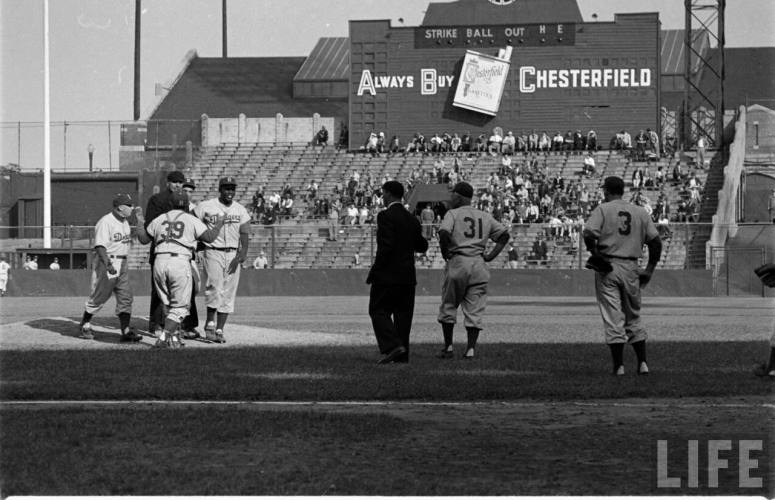 But the fun wasn’t over yet – apparently the Dodger bench continued to express their displeasure with the call. “When the game was resumed…with Cooper at bat, Dascoli suddenly wheeled and ordered the Brooklyn bench cleared. Jock Conlon, second base arbiter,  went to the bench and herded the players out. The boys took their time, many of them pausing en route to pay their compliments to Dascoli, resulting in the whimsical scene below. 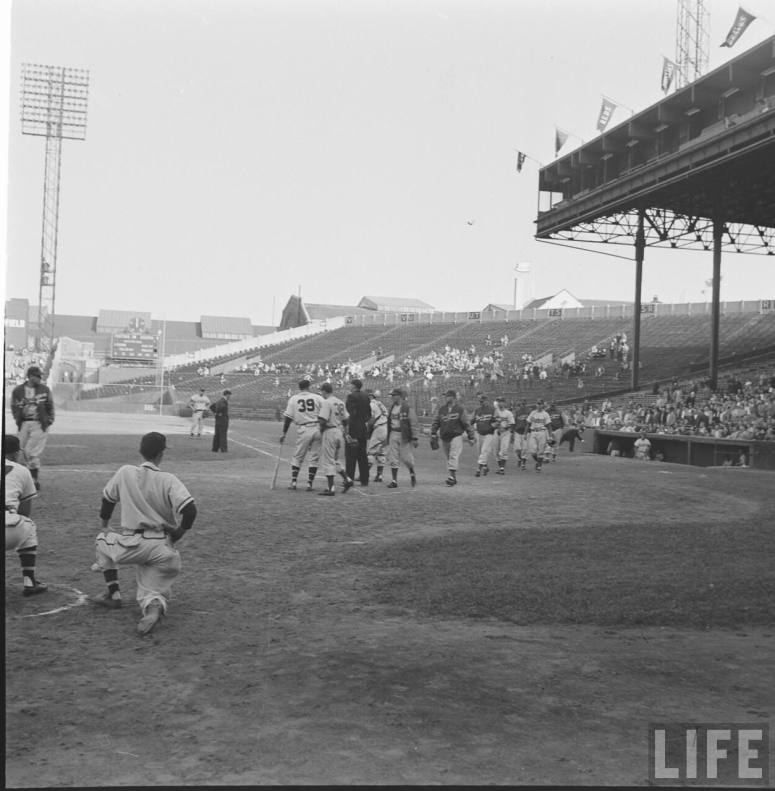 Unfortunately for the Brooks, they only had one more at-bat to stave off a bitter 4-3 defeat. As captured by LIFE, the ruckus had not calmed down in the 9th – the Dodger players in the field that were not ejected and now populated the half empty bench still made their voices heard:

Even Dodger rooters in enemy territory had plenty of words for the men in blue: 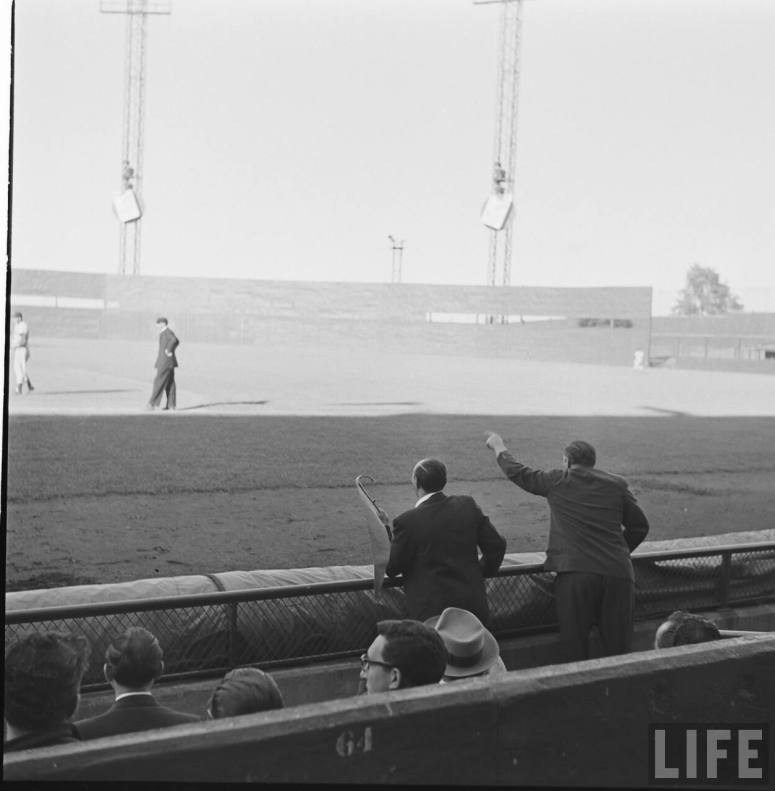 The ejection of Campanella, with his .326/32/107 numbers, turned out to be particularly damaging in the last frame as Pee Wee Reese led off the 9th with a double, but instead of Campy coming to bat with Reese having advanced to 3rd with one out, Wayne Terwilliger grounded to 3rd as Reese held, then Andy Pafko struck out to end it.

Tempers were still high after the game, with the Dodgers continuing to complain as they descended down the runways, and several even kicked and damaged a door leading to the umpire’s room. Said Dodger manager Chuck Dressen: “Dascoli is just incompetent.” Campanella himself took the high road – “I didn’t call him anything. I never called an umpire names in my life. I just asked him how he could call Addis safe when I had the plate blocked – and he just threw me out of the game”. What story Campy told the same boys over drinks after their articles were already sent to press is lost to history, however.

For their trouble, NL President Ford Frick fined Campanella and Robinson $100 each, and Roe $50, but none were suspended. And no one ever found out who splintered the umpire’s door, even though the Boston press thought Jackie did it. Said an unnamed Dodger, “I don’t know who damaged the umpire’s door, but quite a few of our boys either kicked or pounded it on their way to our dressing room.” Even Giants manager Leo Durocher chimed in, saying Robinson should be suspended if he kicked the door, since his catcher, Wes Westrum, was recently suspended 3 days for pushing an umpire, and also knowing full well a 3-game playoff with Jackie’s Dodgers was very likely.

After the smoke cleared, the controversial loss allowed the idle Giants to move to within only 1/2 game of the Dodgers heading into the last weekend of the season. The Dodgers then went to Shibe Park and won 2 out of 3 from the Phillies, but the Giants came to Braves Field after the Dodgers left, and (oddly enough after an additional off-day on Friday) won their last two games of the season there, setting up the 3-game playoff, and the legendary heroics of one Bobby Thomson in the third and final playoff game on October 3rd.