Wednesday, May 7, 1941, Ebbets Field, Brooklyn, the first place Cardinals in town, bottom of the 9th inning, game tied 3-3, and veteran umpire Lou Jorda has just called Dolph Camilli out at the plate to deny the Dodgers a victory. With the bases loaded and no one out, and Bill McGee on the mound, Waner lined out to center, and Camilli, on third, dashed down the line for the potential game winner, but the Cardinal’s All-Star center fielder Terry Moore grabbed the short liner and threw a perfect pitch to Cooper to gun down Camilli for a double play. As can be seen, Camilli (closest to ump) and Dodger manager Leo Durocher strongly disagree with Jorda’s decision. Pee Wee Reese (in his first full season in Brooklyn), the on deck batter, feigns disinterest, while Paul Waner, Dodger at right, appears to be ready to jump into the fray. St. Louis catcher Walker Cooper, who applied the tag, looks on with slight amusement.

After years of futility, the Flatbush faithful had a newfound optimism since Leo Durocher took over as player-manager in 1939; Durocher quickly turned around the team’s fortunes, moving into the first division right away, with a third place finish in 1939 with 84 wins, and improving further to second place in 1940 with 88 victories. So with Brooklyn neck-and-neck at the top of the standings with the Cardinals for most of the early campaign, and St. Louis visiting Ebbets Field for the first time that year coming in with a slim 1/2 game lead, the fans flocked to the ballpark for the big series, with 22,787 in attendance for this first game, the largest weekday crowd that season since Opening Day.

Leading the team’s resurgence was the emergence of Dodger’s first baseman Dolph Camilli as a star. One of the better first sackers in the league in his years with the Phillies, he came into his own upon joining Brooklyn in 1939, earning his first All-Star honor that year at age 32. After another strong campaign in 1940, he roared out of the gate in 1941, already leading the league in both HRs and RBIs on this early May day.

Paul Waner, who almost won the game in the 9th, was winding down a Hall of Fame career in 1941. A 4-time All-Star with the Pittsburgh Pirates in the 1930’s, Waner won 3 batting titles and an NL MVP of his own in only his second year, in 1927, leading the Pirates to the pennant that season. After being released by Pittsburgh in the offseason, the Dodgers picked him up as a veteran presence on the bench.

And that brings us to Pee Wee Reese, who was thought of so highly by Leo Durocher that he relinquished his shortstop duties (as player-manager) to the young Reese when he came up in 1940. Interestingly, he almost became a Red Sox star; being in Boston’s system and one of the minor leagues top stars, owner Tom Yawkey had a great interest in Reese, and asked his own player-manager, Joe Cronin, to scout the young prospect for the big club. Cronin, who knew his own job as the Red Sox’ shortstop was threatened, downplayed Reese’s talent, and he was traded to the Dodgers for cash and players to be named later, changing the course of both franchises in the years to come. 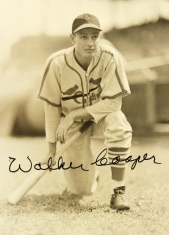 As for the visiting team, at the other end of that bang-bang play was the Cardinals’ imposing Walker Cooper (at 6’3″), younger brother of the young St. Louis pitcher Mort Cooper, and a top catching prospect in their organization for years. Having been blocked by others in their talent-rich system, finally in the 1940 off-season the Cardinals traded their young starting catcher at the time to make room for Cooper, and Walker was off to a good start, batting .357 going into the contest and catching most of the games for the Cards in the young season. 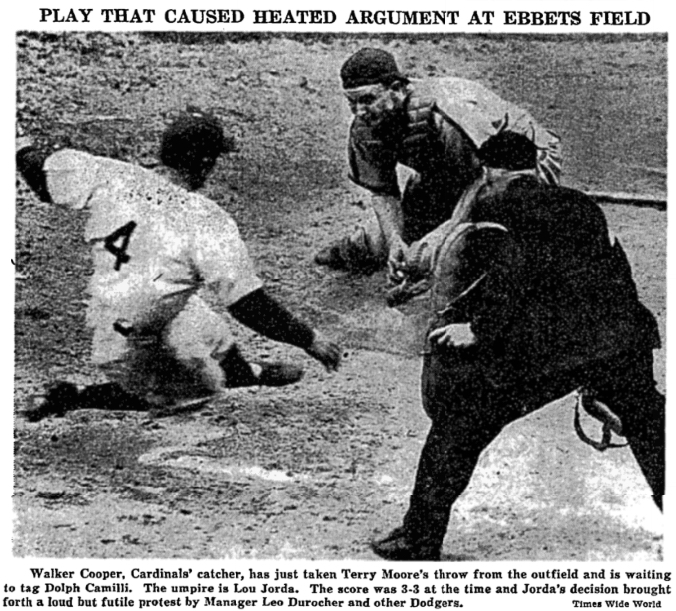 So after the home plate dust cleared and hot tempers cooled, the score remained 3-3, men on first and third, but now two out, with the crowd still standing and young Pee Wee Reese up. With Dixie Walker only 90 feet away, all the Dodgers would need was a clutch hit to save the game from going into extras, and rising star Reese would provide it – a line single to left easily scored Walker, fans swarmed the field to mob their young shortstop and Brooklyn completed their late innings comeback with a thrilling victory that moved them 1/2 game ahead of St. Louis (although due to a mathematical quirk they were percentage points behind, having played many more games at this juncture). 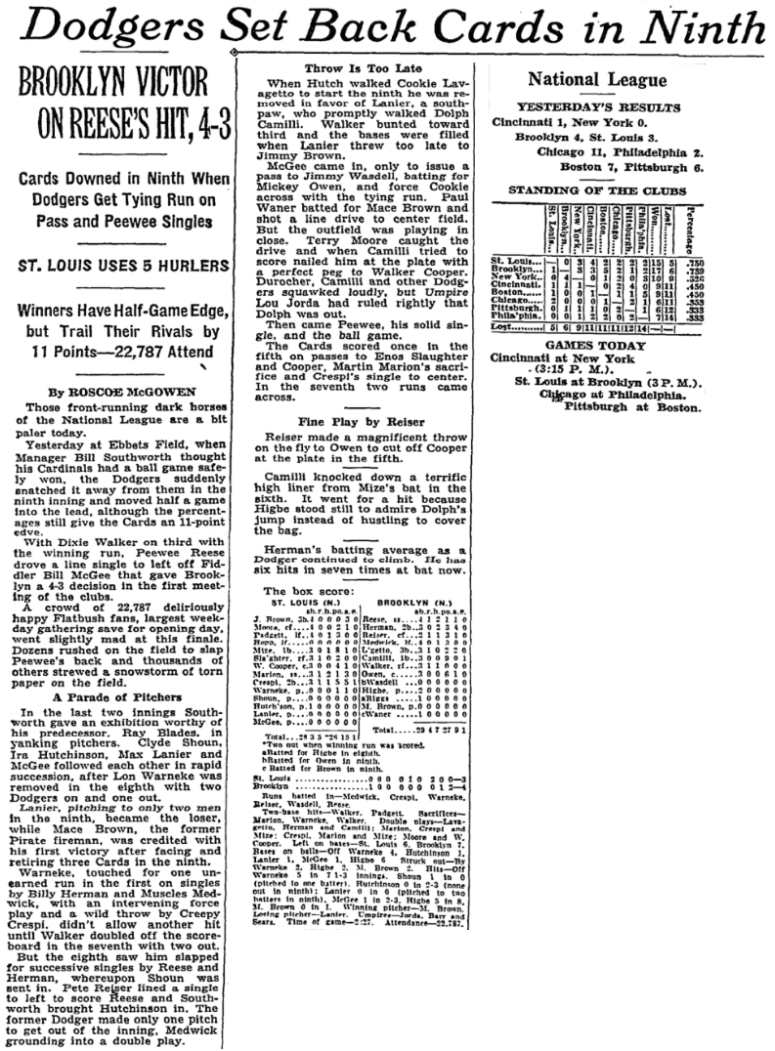 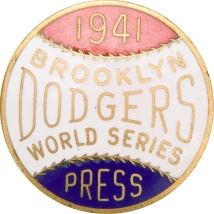 The victory continued what would be a very successful 13-2 homestand that moved the Dodgers from 1.5 games back to 1.5 ahead, but the Cardinals kept pace with Brooklyn the entire year. The Dodgers would prevail in the final week of the season, with St. Louis finishing 2.5 games back, and Brooklyn would have their first pennant in over 20 seasons. The first of many World Series with the crosstown Yankees would follow, unfortunately along with the perennial rallying cry of “Wait ‘Til Next Year!”

In a confluence of past, present and future stars in this early season contest (Waner, Camilli, Reese), Pee Wee Reese won the day. He also scored in the 8th to move the Dodgers within one run (at 3-2), capping a 2-for-4 day that moved his average to .278. Unfortunately, he struggled the rest of the 1941 campaign in his first full season, finishing at .229. He would rebound to an All-Star season in 1942, and then after three years in military service, would return in 1946 to make nine more All-Star teams, win an eventual title for Brooklyn, and become one of the most beloved Dodgers of all time.

Dolph Camilli, although now 34, had his finest season in 1941, leading the league in both HRs and RBIs on his way to winning the NL MVP, and was a major factor in Brooklyn’s pennant-winning season. After another strong season in 1942, surprisingly, he was traded mid-season to the Giants in 1943 – and as something that would never happen today, he so hated the Dodgers’ bitter rival that he refused to report, and instead the Giants traded him to Oakland in the PCL, as manager. He would attempt a comeback with the Red Sox in 1945, but after batting .212 in limited action, his career was over. But he’ll always have a special place with Brooklyn fans as their shining star of 1941 that brought them back to the post season.

Paul Waner, unfortunately, was not around to witness 1941’s pennant-winning season in Brooklyn. After “Big Poison”‘s long and storied career with the Pirates (NL MVP, 3 batting titles, 4 All-Star appearances), he was released by Pittsburgh after 15 seasons at age 38. Durocher liked the idea of adding the veteran Waner to the bench, also to help his young hitters. But Waner’s at bat in that 9th inning would be his last for Brooklyn that year – batting only .171, he was released by the Dodgers a few days later. He was then picked up by the Boston Braves and rebounded with a .279 finish the rest of the way. He would also have a good 1942 with the club, reaching the now-coveted 3000-hit milestone in June against none other than the Pirates. He would go to work for the war effort in 1943, but return to the Brooklyn Dodgers in 1944 and even a few at-bats in 1944-1945 for the Yankees. He was inducted into the Baseball Hall of Fame in 1952, as one of the finest Pirates to play the game.

The rest of young Walker Cooper’s 1941 season was marred by injury, suffering a broken collarbone less than two weeks after this early May game, limiting his season to 68 games, but he rebounded strongly in 1942, making his first All-Star team, helping the Cardinals turn the tables on the Dodgers, winning the pennant by 2 games over Brooklyn and on to the 1942 World Series title over the Yankees. He’d have his finest season in 1943, batting .318 and finishing second to St. Louis teammate Stan Musial in NL MVP voting as the Cards repeated as NL Champs (this time losing to New York in the Series), and would continue his good fortune in 1944 with another World Series championship. Cooper is lesser known these days, but along with two Championships, was an 8-time All-Star and one of the best catchers of his era.

Postscript: As for that young promising catcher that St. Louis moved to make room for Cooper? That was Mickey Owen, who was traded to Brooklyn in the 1940 off season, and was suited up behind the plate for the home team that early May day. Owen did well for the Cardinals, but emerged as a star in 1941, garnering All-Star honors for four years running. Owen left the Dodgers early in 1945 to join in the war effort, and would not make it back to the majors until 1949 with the Chicago Cubs. He’d have part-time duties for a few years, retiring in 1954. But what is Mickey Owen’s true claim to fame all these years later? As most classic baseball fans are aware, the most infamous dropped third strike of all time. The 1941 NL Champion Dodgers found themselves in the World Series down 2 games to 1 at Game 4 at Ebbets Field, but up 4-3 in the top of the 9th, 2 out, no one on, with a 3-2 count to Yankee Tommy Henrich. Henrich swung and missed for Strike 3, and the Dodgers would win it, tying the Series at 2-2 – except Owen missed the ball. It bounded to the backstop, Henrich was aboard, the Yankees had new life, and they’d rally for 4 runs to snatch victory from defeat with a 7-4 win and a commanding 3-games-to-1 lead, and would win the Championship the next day at Ebbets Field. The Dodgers would not return to the World Series until 1947, and of course not win a Championship until 1955.

So, as has been shown in baseball history, and in this blog many times, no matter the talent, the motivation, the location, or the situation, a team’s and especially a player’s fate often rests on what can happen in one single moment. And therein lies the beauty of the game.