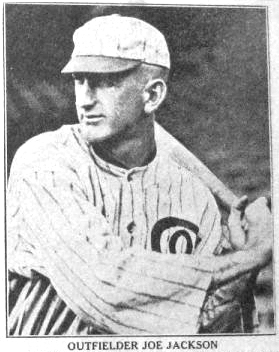 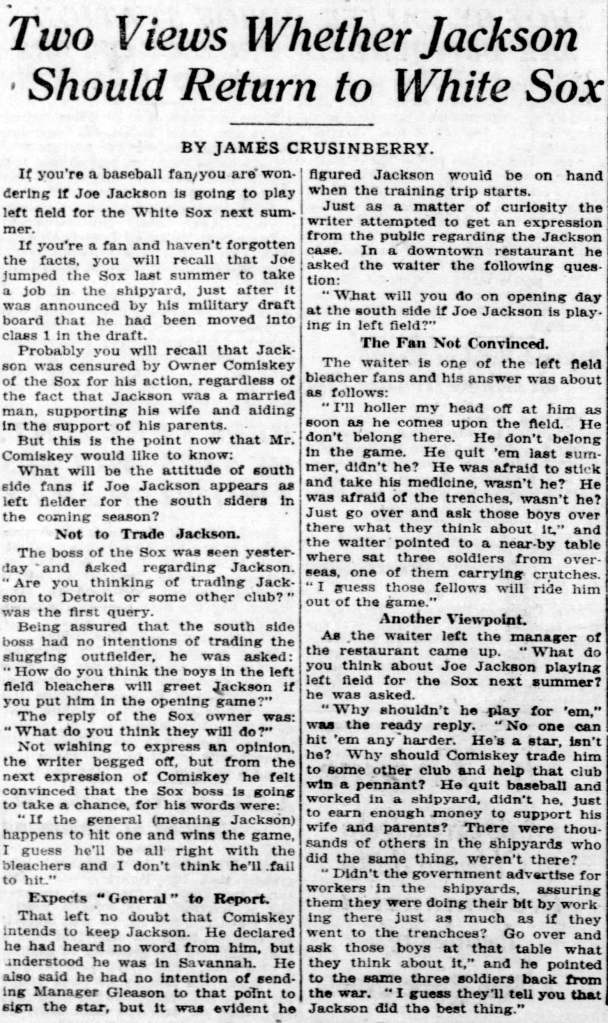 100 years ago, 1919, as is well known to classic baseball fans, was the season of the infamous Black Sox Scandal. As an interesting preface to that startling development, there was an earlier “scandal” that had already cast Joe Jackson in a bad light with many baseball fans. 100 years ago today, the Chicago Tribune, above, discusses the ambivalence of the fans of the Windy City regarding the return of Joe Jackson to the White Sox for 1919, as a result of his actions regarding the War in 1918.

When the U.S. entered WWI in 1918, Joe Jackson, as a married person, was initially given a deferment by his local draft board, but the board reversed that decision, at which time Jackson instead quickly found work at a Delaware shipyard to both support his family as well as aid in the war effort. His decision, however, was seen by fans and the press as a way to “avoid” draft induction by conveniently staying stateside instead, and out of the trenches in Europe. 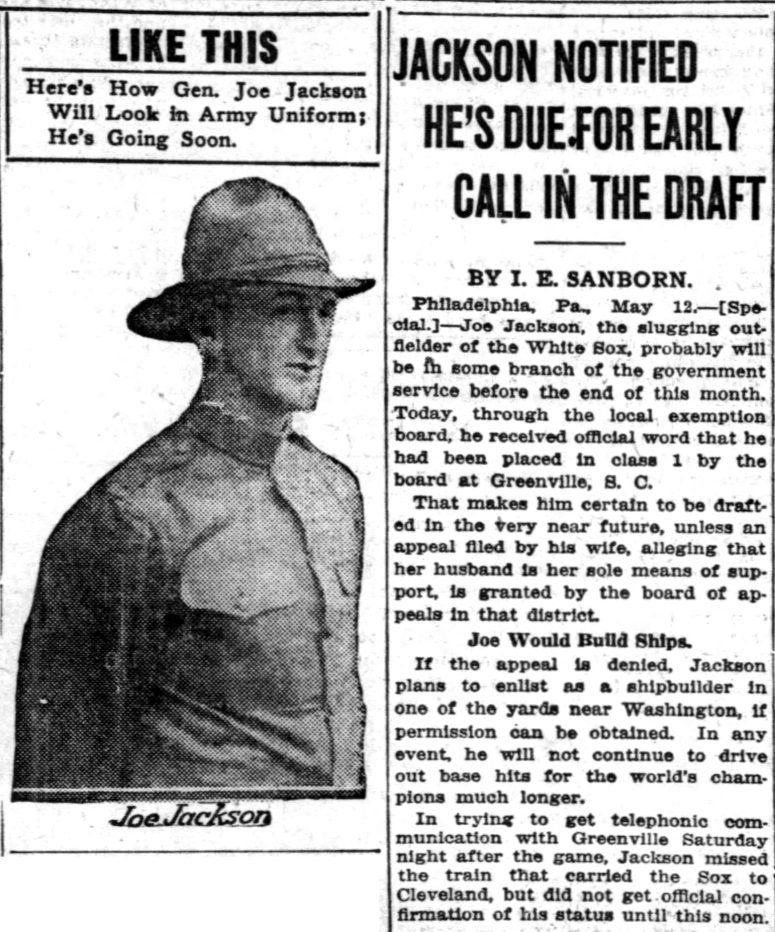 The Chicago press, still holding out hope for their “General”, was initially tempered about the situation, and attempted to soften the stance of White Sox owner Charles Comiskey, who in reality made it clear that any players of his who elected to work in the shipyards instead of being drafted (Sox Lefty Williams and Byrd Lynn joined Jackson in this pursuit) need not return to the club and should consider themselves free agents. But the national sports press was more direct in condemning his actions: 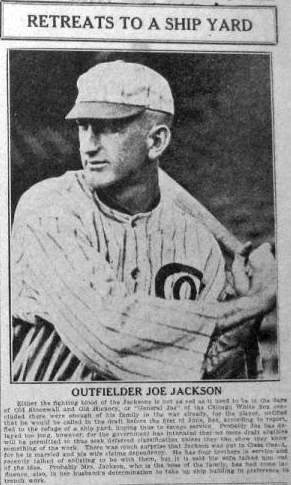 “RETREATS TO A SHIPYARD” – the Sporting News (of St Louis) headline blared disparagingly in May 1918. “Either the fighting blood of the Jacksons is not as red as it used to be in the days of Old Stonewall and Old Hickory, or “General Joe” of the Chicago White Sox concluded there were enough of his family in the war already” they continued. Jackson “talked of enlisting” with his four brothers already in service, but “his wife talked him out of the idea. Probably Mrs. Jackson, who is the boss of the family, has had some influence, also, in her husband’s determination to take up ship building in preference to trench work.”

After the war ended, however, and the White Sox were coming off a poor campaign, Comiskey, in the tenor of the optimistic post-war times, relented and announced that the players would in fact be allowed back. Others also reversed course – “TIMES AND SPIRITS CHANGE” was the mea culpa offered by the Sporting News in January 1918. “Our war madness of six months ago has subsided to a great degree and we have learned…to take a new view of the man…The government said work or fight…the players obeyed the highest order. There’s nothing more to be said.”

But the debate among the fans was apparently far from resolved, as the top article illustrates. Tribune writer James Crusinberry asked a local waiter, “What will you do on opening day at the south side if Joe Jackson is playing in left field?” His reply:

“I’ll holler my head off at him as soon as he comes on the field…He don’t belong in the game…afraid of the trenches, wasn’t he?…ask those boys (soldiers back from overseas sitting nearby) what they think about it.”

The diligent reporter sought out another point of view, this time from the restaurant manager:

“Why shouldn’t he play for ’em?…He’s a star, isn’t he?…he quit baseball and worked in a shipyard…to support his wife and parents…there were thousands of others in the shipyards who did the same thing, weren’t there? Didn’t the government advertise for workers in the shipyards, assuring them that they were doing their bit by working there just as much as if they went to the trenches? Go over and ask those boys (the same soldiers as before) what they think about it…they’ll tell you that Jackson did the best thing.”

No report was given on the opinion of the soldiers themselves.

Of course, Joe Jackson did re-sign with the White Sox, and the naysaying fans and even the Chicago press did take him back, for the most part. But, as we all know, their trust in Jackson would be put to a much more strenuous test, in the months to come.