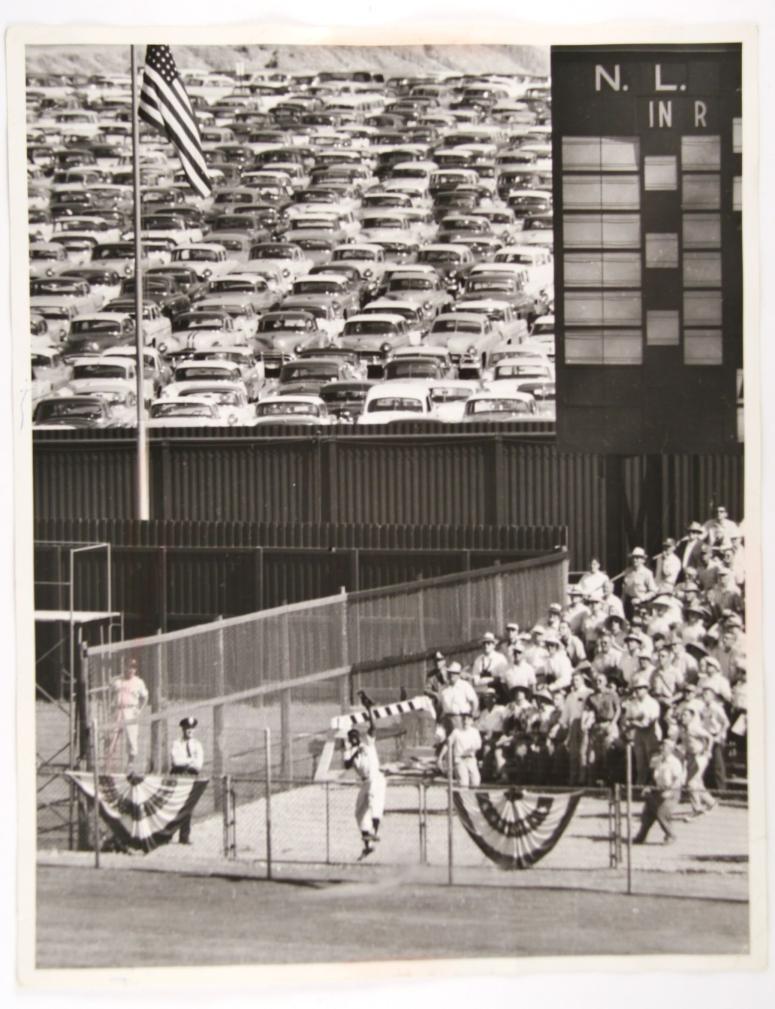 Tuesday, July 12, 1955, the 22nd All-Star Game, County Stadium, Milwaukee. Top of the 7th inning, AL up 5-0, one on, two out, and Willie Mays leaps at the fence to steal a home run away from Ted Williams, which would’ve made the score 7-0. In the NY Times: “…Williams stroked a powerful smash to right center. But Willie gave chase and just as the ball appeared to clear the wire railing, the Say Hey Kid leaped up to snare the ball in his glove.”

As it was an All-Star Game, there were many press photographers present, and as shown here, there were photos taken from all angles of this amazing catch, since no doubt there were many cameras already trained on Mays. Willie was flying high in 1955, as the reigning NL MVP, batting champ, and with the other New York Giants, World Series Champions from 1954. Unfortunately, the Gold Glove award was not originated until 1957, but it’s a sure bet that Mays would have snagged a few in the early ’50’s, as he in fact won 12 straight NL OF GG’s right from the award’s inception until 1969. Also, in the ’50’s and ’60’s, you could’ve almost renamed the ASG “Willie Mays Day” as he participated in the game in every season of his career, except his rookie season (in which he was Rookie Of The Year!). 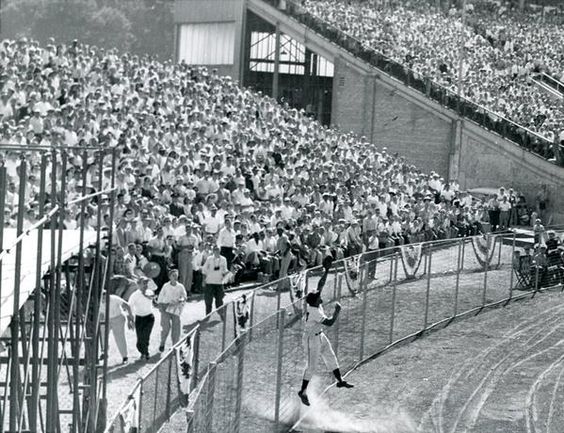 The American League could’ve used that clout by Williams; after Mays caught the last out in the top of the 7th, above, he trotted in and led off the bottom of the inning with a single, eventually coming around to score as the NL tallied 2 in the 7th, and then for good measure, Willie also singled and scored during a rally in the 8th as the National League scored 3 more to tie it. Mays did strike out looking with two on to end the 9th, however, sending the game into extras. Would the Say Hey Kid have one more magical moment this day? Perhaps, but Stan Musial had other ideas, hitting a game-winning home run in the bottom of the 12th inning to give the NL a 6-5 victory – with Mays on deck.