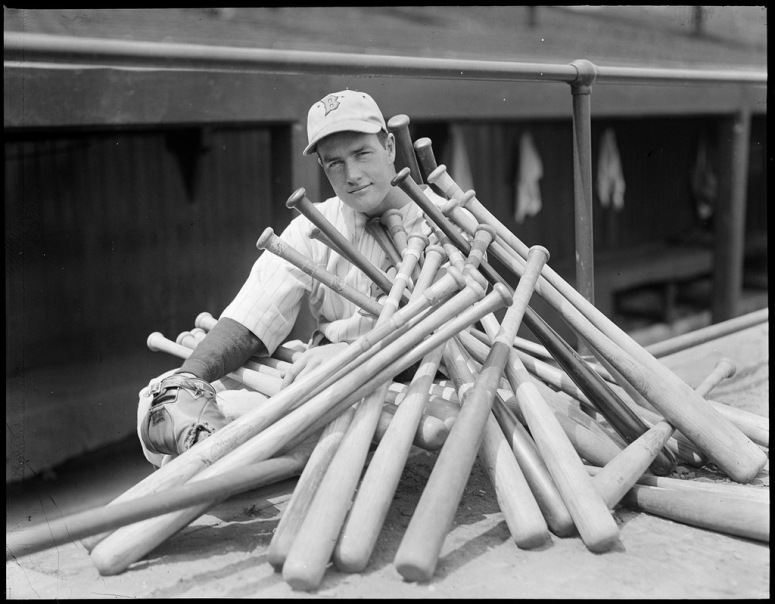 Attending a tryout out of high school through a local contest, Fletcher stuck with the Boston Braves and played a few games starting at age 18 in 1934 and then in 1935 (being a teammate of Babe Ruth for a short time), but he wasn’t quite ready, eventually returning in earnest in 1937. Pegged as the starting first baseman for the renamed Bees that season at age 21, unfortunately Elbie still didn’t do too much with any kind of bat that year, with a paltry .321 OBP, .629 OPS and .308 slugging, with only 1 home run. Although his hitting continued to improve in later seasons with Boston, Fletcher, a Massachusetts native, really didn’t develop as an offensive player until being traded to Pittsburgh in 1939. Elbie attributed this to pressing in front of his hometown fans, but moving from Braves Field to more hitter-friendly Forbes Field probably didn’t hurt. In fact, he improved so well that he led the NL in OBP 3 years running (1940-1942), garnering some MVP votes along the way, and even got an All-Star nod in 1943.

His newfound consistency was halted by serving in the Navy for two years at the close of WWII. He returned to the Pirates in 1946 but couldn’t quite match his best years, and, after a season in the minors in 1948, he returned to Boston (back to being called the Braves) for one last go-round in 1949 with a respectable .262 average, and was even honored by the team and fans on August 31 with an Elbie Fletcher Day at Braves Field.

So if you feel yourself going batty, just stay the course like Elbie Fletcher, and maybe someday they’ll have a day in your honor! Bats All, Folks.